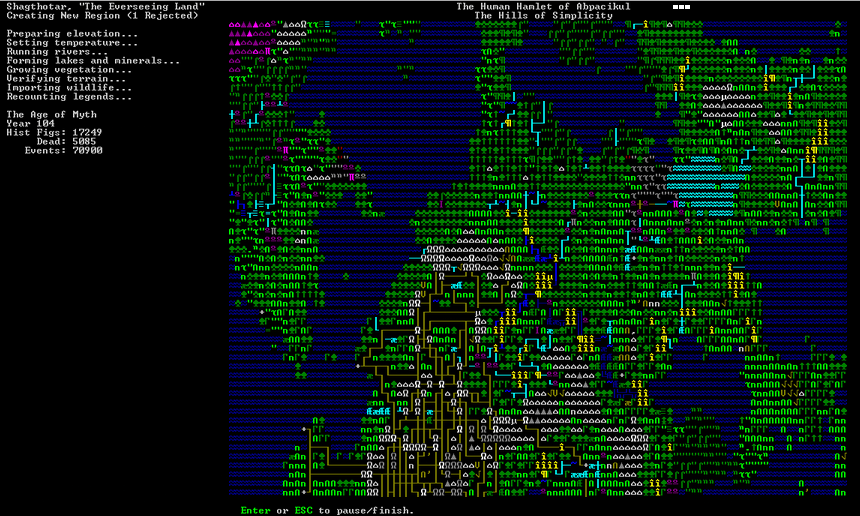 I love Dwarf Fortress — and that is why I’ll stay away from DF in this blog.

DF is a simulation game in a medieval setting. It’s legendary for its complex emergent behavior and Tarn Adam’s incredible, multi-decade devotion to creating it. It was once featured in the Museum of Modern Art, which automatically downloads its source code every time a new version is released.

To those who play or have read about Dwarf Fortress, it will become clear — if it isn’t already, given my working title is “Difclone” — how much I’ve “drawn” from DF. I didn’t come up with the idea for Difclone. I doubt I would have, if DF didn’t exist. Much of the original motivation for this project came from my appreciation for what DF is, my hopes for what DF could be, my frustrations concerning certain aspects of Toady’s approach, and my blasphemous impatience.

Excluding Dwarf Fortress from this blog eliminates a crutch. It forces me to justify my design decisions beyond pointing to DF and saying, “Yeah, see?”

Furthermore, if I discuss DF in this blog, I’ll fixate on my frustrations with DF and how I’d like to change it, despite all the things I love about DF. I know many DF players would understand my discussion is for !!SCIENCE!! but I don’t want to appear as a DF hater, I don’t want to unintentionally give DF bad press (as if anyone’s reading my blog), and I don’t want to turn any newcomers away from DF.

Finally, if you’ve never played DF, go download one of the lazy packs, open up the wiki, and learn to play. It’s fun; it’s insane; it’s something you’ll have no comparison for.